The WHO spends more on travel for their staff then they spend to fight the health problems in the world. Its current president Tedros Adhanom Ghebreyesus is not even a Medical Doctor and he has been accused of covering up three possible cholera epidemics when he was health minister in Ethiopia. He had also been part of a violent and corrupt political group in his country. And this is the highest health authority in the world… 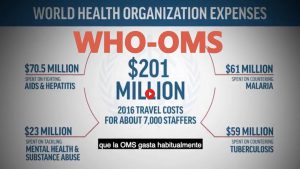 It’s the WHO that decided to declare a pandemic for this Covid-19 flu (like for the swine flu, in 2009), which then forced your (all) goverment(s) to impose lockdowns, face-masks, social distancing, follow-apps and possible future vaccinations for your country. Please be always aware that this is a global problem and not just of your country or government.

The WHO started with beautiful intentions as a non-profit and independent organization when it was set up after the 2nd world war. However, since some decades the WHO became more and more privatized and is now 80% is funded by Bill Gates the farmaceutical companies who have only one obsession: to vaccinate the whole world and they are doing everything to convince the world population that this is an emergency, that it’s urgent, that it’s the only “saviour”, that it’s unavoidable and that they are right. And they use dramatization and one-sided repetition on TV, newspapers and ‘social’ media to convince you to.

You should know there is another side to the WHO and the whole Covid-19 pandemic story. This short video is just one part of the Plandemic II documentary.